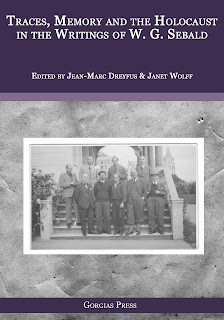 Title: Traces, Memory and the Holocaust in the Writings of W.G. Sebald.
Guest editors: Jean-Marc Dreyfus and Janet Wolff.

1. Carole Angier, ‘And so they are ever returning to us, the dead’: the presence of the dead in W.G. Sebald

2. Jean-Marc Dreyfus, Kindertransport, camps and the Holocaust in Austerlitz

This article develops an historical analysis of Austerlitz. Rather than tracking the (few) errors in historical narratives that the writer Sebald left in his text, it aims at considering the material used by the author to develop the story of Jacques Austerlitz. Through a complex game of ‘correspondences’, from train station to train station across Western Europe, Sebald gives his own vision of Kinder- transport’s memory in the United Kingdom and of Holocaust memory and writing in general. Consistent with the declarations he made in several interviews, that it is in his view impossible to describe directly life in the camps and ghettos, he uses certain marginal aspects of Nazi persecution to build a powerful narrative of facts and memory. For example, he ends his story in Austerlitz, a satellite camp of Drancy for Jews, which was installed in warehouses in the heart of Paris. This camp was never described by historians before my own book – co-authored with Ms Sarah Gensburger – Nazi Labor Camps in Paris. Austerlitz, Lévitan, Bassano, July 1943–August 1944. My article will try to show how a holocaust historian can read Sebald's writing, as an indirect approach to his difficult subject-matter.

3. Monica B. Pearl, The peripatetic paragraph: walking (and walking) with W.G. Sebald

What is perhaps hardest to grasp and explain about the writings of W. G. Sebald is what it feels like to read him. It is unlike reading almost anyone else. Many comparisons have been made, for example to Thomas Bernhard, to Kafka, to Nabokov, to Proust, to Andre Breton, to Walter Benjamin, and many other writers; the range of comparisons is suggestive of a futile urge to categorize his writing. This essay focuses on Sebald’s style, making observations about paragraphs, metaphor, the digressive quality of his prose, and also his subject matter. Through an extensive consideration of Sebald’s writing, and also what others have written about it, this essay attempts to capture what it feels like to read Sebald.

4. Jeremy Gregory, ‘I couldn’t imagine any world outside Wales’: the place of Wales and Welsh Calvinist Methodism in Sebald’s European story

This essay explores the vital place of Wales, and Welsh Calvinist Methodism, in Sebald’s Austerlitz. I argue that to an extraordinary extent Wales, in terms of both a landscape and a site of childhood events, functions as a marker and a point of comparison which echoes during the rest of what unfolds. I also suggest that some of the marks of Welsh Calvinism – such as providentialism, predestination, and fatalism – lie behind the narrative thrust of the novel, as events unfold which happen in ways which Austerlitz cannot easily explain. In this reading, Calvinism becomes one of the keys to the narrative structure of the book and Austerlitz’s feeling that he is one the elect resonates with both a Calvinist theology and an Israelite sense of identity. The essay ends by suggesting that the care with which the ‘Welsh’ section of Sebald’s book is constructed reveals Sebald’s own ‘love affair’ with the Welsh landscape. It is worth at least speculating that during his time as a lector in German at The University of Manchester, from 1966 to 1970, Sebald took time to explore the nearby spectacular landscape of Snowdonia which later featured so centrally in his breathtaking novel.

This essay explores the tropes and figures deployed by Sebald in the opening pages of the ‘Max Ferber’ narrative of The Emigrants (1997), in order to scrutinise this narrative’s representation of the city of Manchester. Key tropes of movement and fixity, circulation and linearity, illumination and obscurity, movement and transposition delineate the urban space; these relate to the narrative’s concern with the aesthetics of the painters Frank Auerbach (on whom the narrative is based) and its connections to those of R.B. Kitaj. The symbolic functions of trees in the narrative are related to Deleuze-Guattarian notions of the rhizomic and the territorial; this, in turn, is connected with Kitaj’s notion of Diasporism and Levinasian concepts of migration and errancy, to explore the ‘destinerrant’ tendencies of Sebald’s narrative. Ferber’s walks around Manchester provide a concluding set of movements through which the essay examines the narrative’s debts to works by Auerbach and their painterly development from the ‘grids’ of modernist aesthetics to the ‘utter blackness’ that haunts The Emigrants.

6. Janet Wolff, Max Ferber and the persistence of pre-memory in Mancunian exile

This essay considers Sebald’s writings about Manchester, notably in the Max Ferber section of The Emigrants, the prose poem After Nature, and the ‘Bleston’ sequence in the 2008 collection, Über das Land und das Wasser. Sebald’s Manchester is a city of ruins, dust, deserted streets, blocked canals – a city in terminal decline. The Ferber story covers a period of about fifty years, and although the post-war scenario was certainly rather bleak, the city’s regeneration in later years is barely registered. The same negative and depressing account of the city appeared in the earlier poems too. It has been suggested that Sebald’s personal unhappiness during his early years in Manchester coloured his view of the city, and perhaps explains why he was drawn to its marginal areas and its ‘neo-Dickensian aspects’. Sebald’s contemporary reading of Michel Butor’s novel, L’emploi du temps – another characterisation of the city as dirty, ‘hateful’, and even evil – no doubt fed into his own view. My suggestion, though, is that Sebald at some level is not really writing about Manchester at all. Rather, the melancholy which pervades his cityscape is the displaced memory of aspects of his own German past. Looking at Sebald’s other work, and the places where he records his complex attitude to his birthplace, it is possible to identify a kind of ‘pre-memory’ – a hopeless nostalgia for an ideal, pre-lapsarian Germany, forever (for him) contaminated by the events of the Third Reich. It is this that translates into a world-view in exile.

Scholarship on W.G. Sebald’s work, seduced by his brilliant prose, has tended to concentrate on the texts as verbal matters, at the cost, at times at least, of the images. Thus within much of the existing Sebald scholarship the rich and ambiguous relationship between word and image gets short shrift. This chapter interrogates that relationship, approaching Sebald’s work, especially Austerlitz (2001), as a potentially productive challenge to architectural history. I weave my account through a consideration of The Sight of Death. An Experiment in Art Writing (2006) by the renowned art historian, T.J. Clark, which poses a deliberate and self-conscious challenge to certain conventional practices within art history. Thus the chapter examines the use of images – especially images of architecture – in Sebald's work to reflect on what his approach might offer the discipline of art history.

8. Muriel Pic, Novel crime, hunting and investigation of the traces in Sebald’s prose

Mindful of the criminality in memory, Sebald’s prose itself leads an investigation. He uses the inquest process from the crime novel genre, and espouses the specific narrative regime of the crime novel. He also makes reference to the latter by punctuating the narrative with true crime stories. In Vertigo, for example, Sebald relates an unsolved crime taken from an article in an Italian newspaper. The story serves to reinforce an uneasiness felt by the narrator since his time in Vienna. Sebald’s writing can be seen as an historical operation of searching for clues, which are not presented as documents producing a discourse of truth. Rather, they give rise to an experience of remembering which becomes entwined with that of reading. In his prose, the document appears as a fragment detached from its context, free to provoke a re-living of the past by invoking the imagination. Sebald’s aim is to bring the past to life through prose and images. He uses documents from history, rejecting the positivistic historical method borrowed from the natural sciences. Wandering through time with the narrator in Sebald’s works, the reader is thus drawn into a deep meditation on identity. This essay analyses the complex narrative techniques Sebald uses to develop his vision of the past, including his pathbreaking use of photographs.